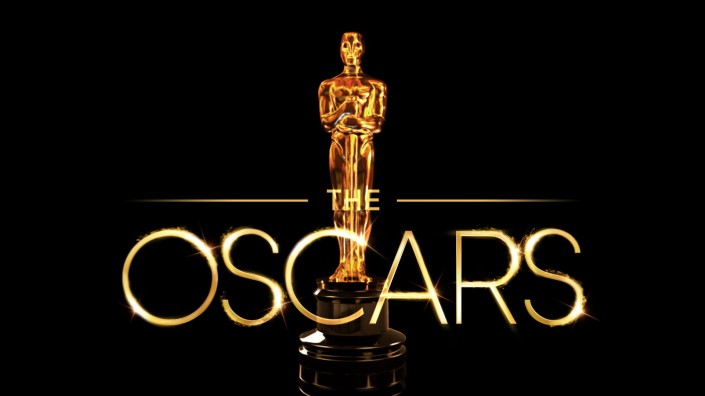 The Award season just went by and by the time it culminates at Oscars, one pretty much has a good idea of how celebrities are going to dress and the style they would choose to follow. Oscars brought in drama but a lot of it was rather littered with conventional choices. However a lot of actresses did manage to turn heads for all the right reasons on the red carpet. 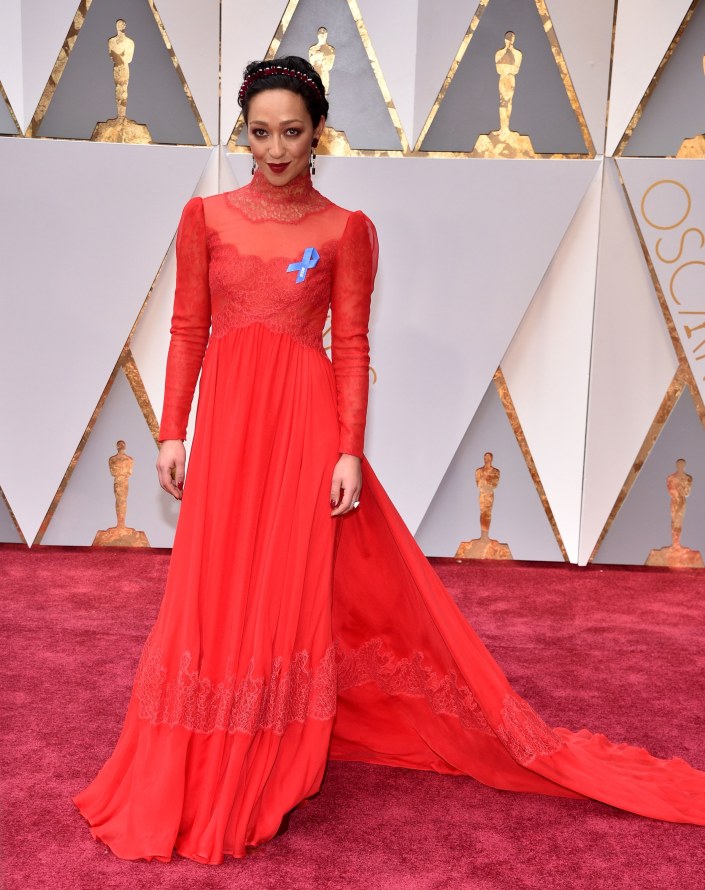 The sublime Ruth Negga opted for a custom Valentino. Now I have to admit that the victorian neckline wasn’t something I was too on board with but it definitely grew on me. The red gown is not the usual choice on a red carpet but Negga isn’t a usual actress. The Loving star had slightly puffed sleeves which tapered to a well cut perfection, a flared gown with lace insert and with that ACLU ribbon supporting the cause, Negga made sure to accent it through. Going with a dark red lip and ruby tiara by Irene Neurwith was just perfection. While it may seem a lot of red to some, the color suited the star’s skin tone perfectly making the perfect debut on the Oscar red carpet. 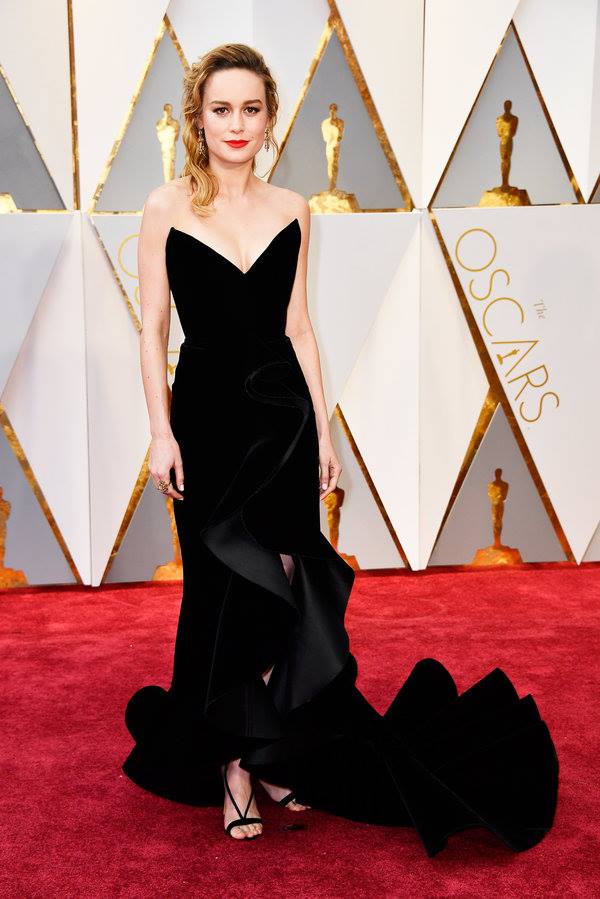 Finally some drama and the perfect kind from Brie Larson who pretty much disappointed me last year and at globes this one. The plunging neckline Oscar dela Renta was a dream on the actress. The velvet number is the kind of unusual in the usual territory that one would want this fierce actress to take. The ruffle dramatics, played off perfectly her clean and simple palette and the classic red lip. More of these please!!! 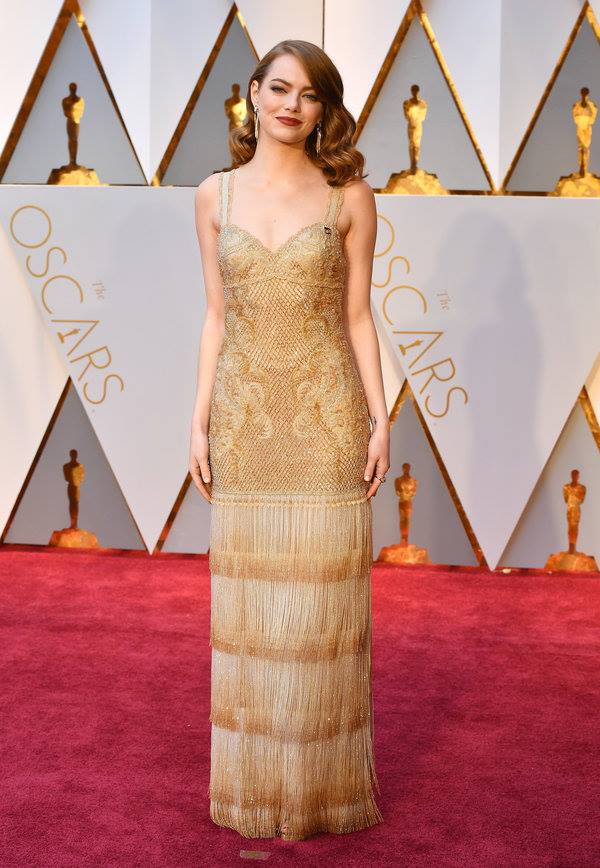 The best actress winner of the night shone like the trophy in a fringed number by Givenchy. The beaded and fringed gown was the perfect pick for Emma since she had such a good award season red carpet run. The perfect length with fringes just grazing the ground, with a strapped unusual neckline for Oscars that we haven’t seen in a while, Emma takes pretty risks and ones that look good on her (i still remember her from last year). Her dark ginger hair styled perfectly in an old hollywood glamour fashion and a dark lip color rounded off this look perfectly. 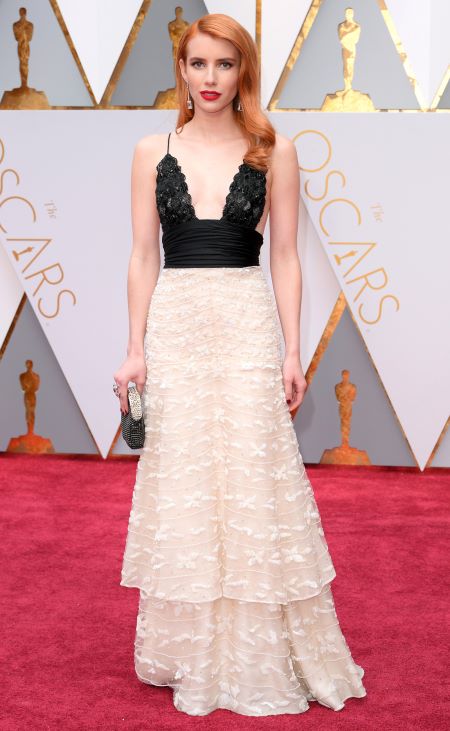 Another Emma of the night, Emma Roberts chose a vintage Armani Prive gown. The top with a pretty lace details, sultry silhouette and a little side boob played off perfectly against layered vintage lace cream skirt. With her set in a perfect stroke of slash curl and red lip to offset the whole look, Roberts stood out from Michelle Williams who wore a similar number. 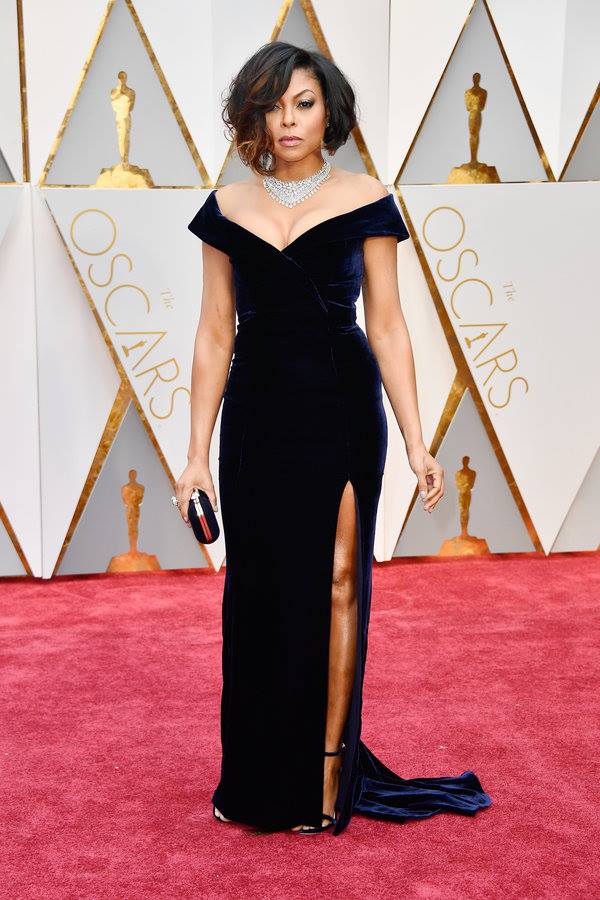 Giving old hollywood glam a heavy shot of sexy and sultry was Taraji P. Henson in this Alberta Feretti velvet number. The off shoulder plunging neck number hugged the Hidden Figures actress in all the right places, as she sashayed down the red carpet. Complimenting her was the Nirav Modi necklace that reflected the neckline and sat perfectly on the actress. They say don’t do thigh high with a deep neck, well Taraji does it and pulls it off with flying colors. The slit with a sleek heel was what the gown needed to shine. With her weave as a short glam bob, Henson exuded some major Liz Taylor vibe with no hidden figures in sight 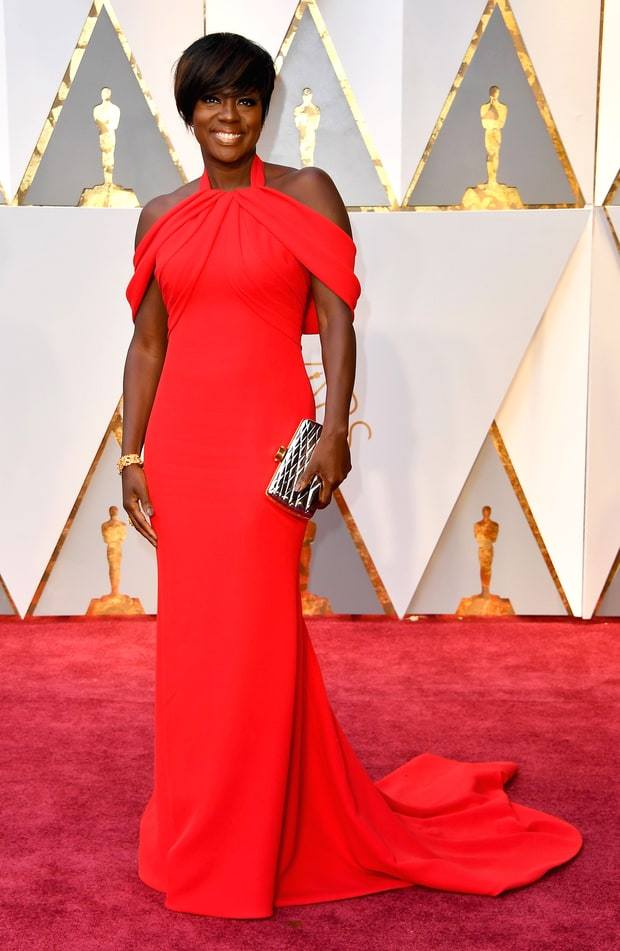 The powerhouse Viola Davis went for a much more sleeker bob to compliment her red gown. Another red favorite of the night, the best supporting actress winner looked statuesque in the Armani gown that was tailored and draped in perfect proportions. The draped detail on halter neck going into a cold shoulder gave it a relaxed approach in a tailored look. Accented with metallic accessories, Viola ruled the red carpet and her winning speech with panache. 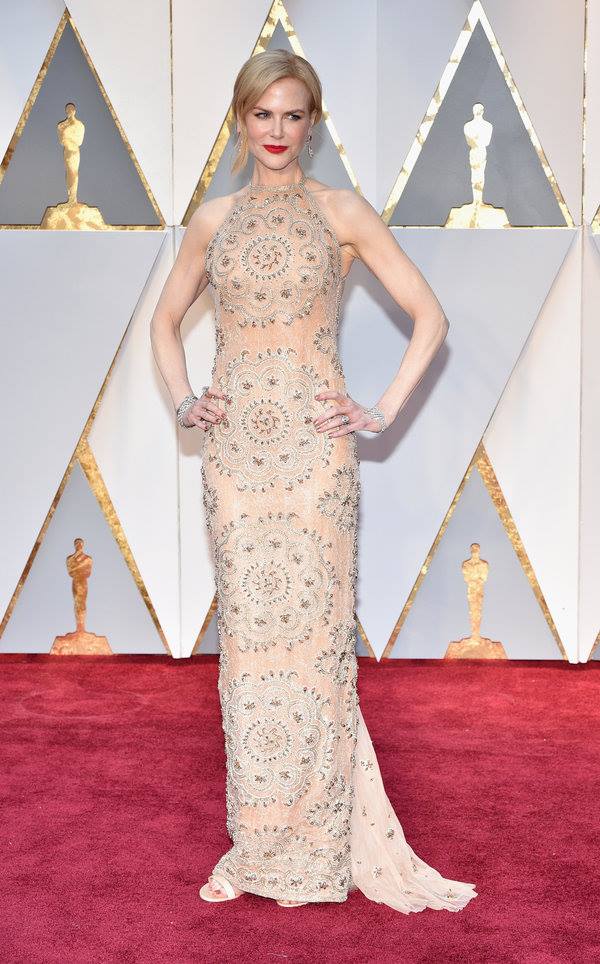 Nicole Kidman has had her share of hits and misses. While the cockatoo dress at Globes very much looked like she was trying to be Cate Blanchette but not quite getting there. Thankfully for Oscars red carpet, Kidman got her mojo back in an Armani Prive gown that suited her tall frame, With her hair sleek parted and a red lip, Miss Kidman kept it simple and striking all at the same time. 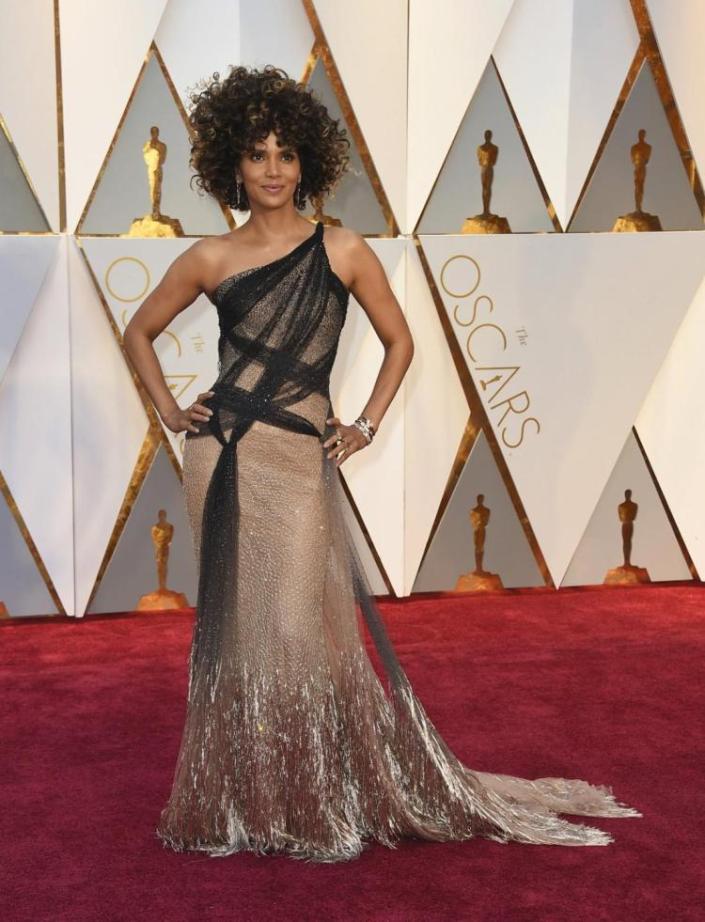 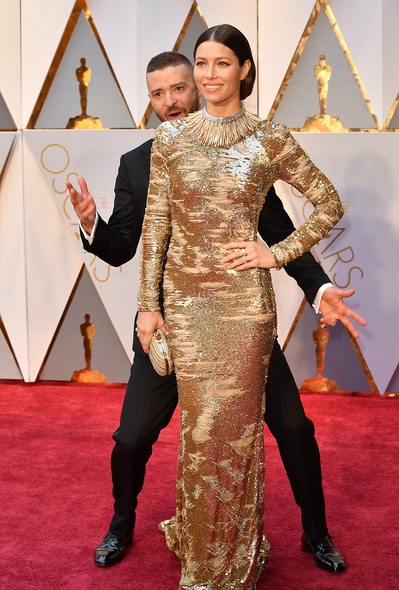 The liquid gold was certainly a trend of the night for Jessica Biel wore a creation by Kaufman Franco. The shimmery gold gown featured beaded scratched empty spaces – and no it is not that fabric which when touched the sequins turn over… the designer specifically did that. However the crowning glory of this look was the very modern tifanny neck piece with fringes. The silver gold combo was very contemporary and we did see versions of that on runway few days later. A minor gripe – I wish she had her hair slick back instead of a bun 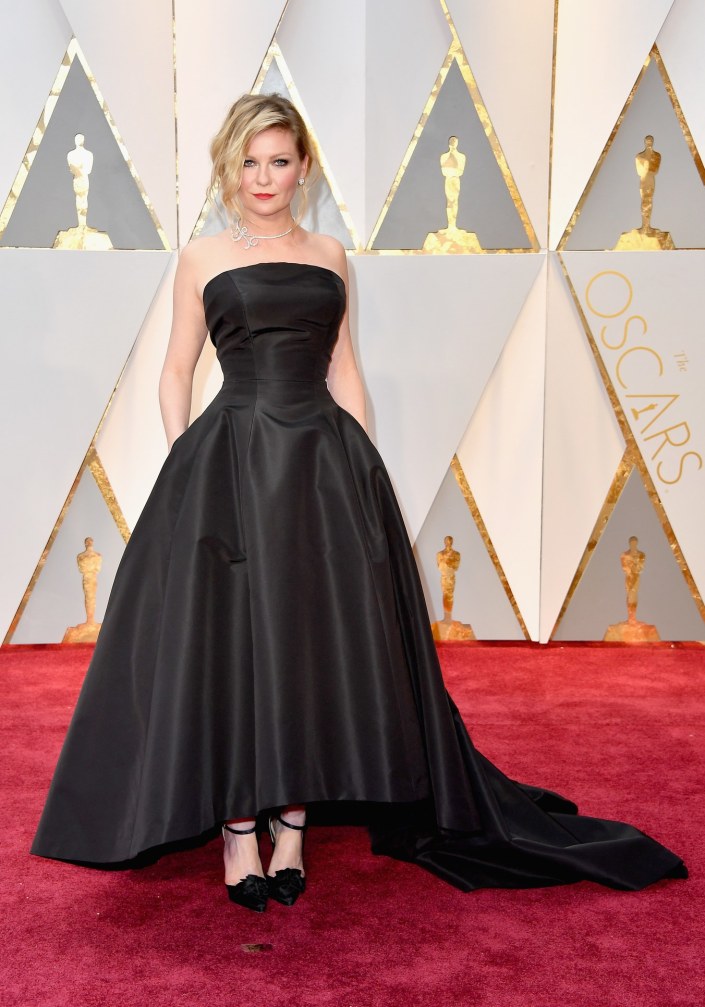 Paying homage to the movie she represented, Kristian Dunst’s high low hemline scallop gown was designed by – wait for it – Christian Dior himself in 1952. The fashion house was kind enough to re-produce an exact replica according to Ms. Dunst’s measurements, from their archives. It is no coincidence that the construction was flawless with the Dior’s ‘new look’ and the strategically placed pockets causing a certain posture that was required for this gown. Such postural studies from the master himself, is still a force to be reckon with and something contemporary designers still struggle to study within simplest of means. 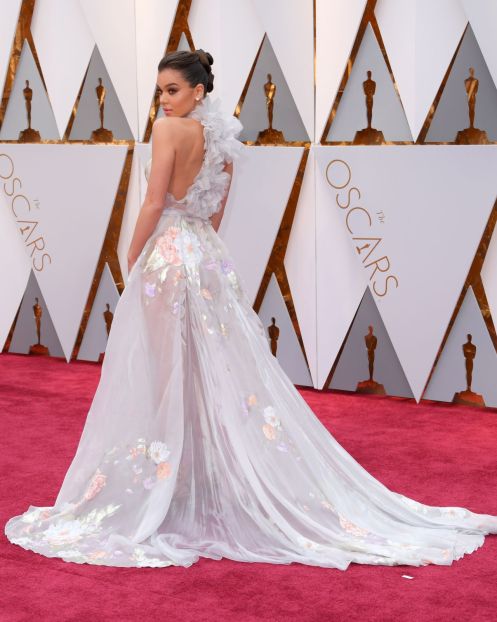 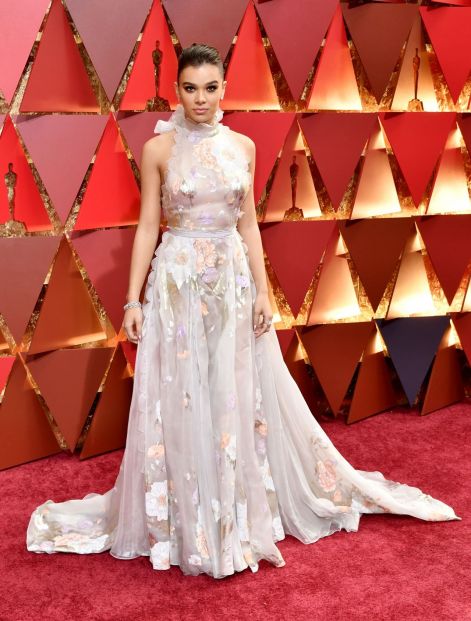 Hailee Stienfeld has grown up and how – usually such pretty gowns with floral appliques are paired with a blush sun kissed makeup, but this new gen actress chose a fierce look for this soft gown hitting home runs with every pose. Stienfeld going the unexpected route proved that she is definitely one of the fashionistas on the red carpet and knows how to make an entrance. The Ralph and Russo couture gown sheer perfection in more ways than one. 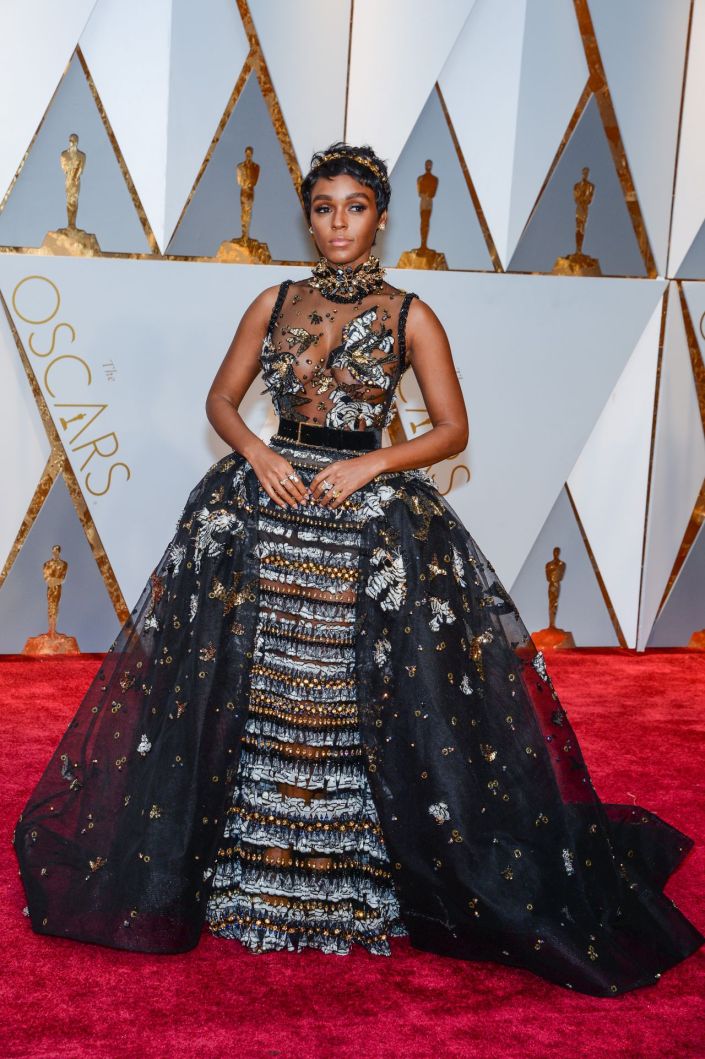 Janelle Monae does what she does best. Sticking with black and white and eclectic picks for the red carpet for her awards run, this one was no different. Even from Elie Saab Couture, she had to pick out an unusual choice. With an ornate gown Ms. Monae gave the evening the most drama and had here princess moment in the process. Finishing off the look with dramatic bejeweled neckpiece seen on the Elie Saab runway, along with Forevermark diamond pieces and regal Jennifer Behr headband covered in colored stones was a cherry on the top

*Images belong to their respective owners

This site uses Akismet to reduce spam. Learn how your comment data is processed.

Work with me, have a post suggestion or just a question??

There was an error retrieving images from Instagram. An attempt will be remade in a few minutes.